Sometimes, I think the mule has bad dreams in which I’m terribly cruel and abusive to him and, when he wakes, he can’t quite figure out fact from fiction. A little like when you dream that your significant other has cheated on you (or sold your pony! BEN!) and you’re ridiculously angry with them when you wake up. At least, this often seems like the only explanation to Marty’s behaviour.

He is very much a mule of contradictions at the moment. On the one hand, it feels like the trust he has in me and our bond has gone up a level; he no longer overreacts to things the way he used to, and I am now able to run my hand all over his poll area without him flinching or running away – even when he’s loose in the field. And yet he still doesn’t want to be caught, he no longer wants to hang out with me in the field, he doesn’t ask me for scratchies, and he won’t let me touch him anywhere past his shoulder except for when I’m grooming him. This means even his beloved butt scratchies are no longer a thing. And that mule loves butt scratchies.

Marty recalls that one time I turned into a hydra and savagely beat him with a seagull. He’s pretty sure that actually happened. 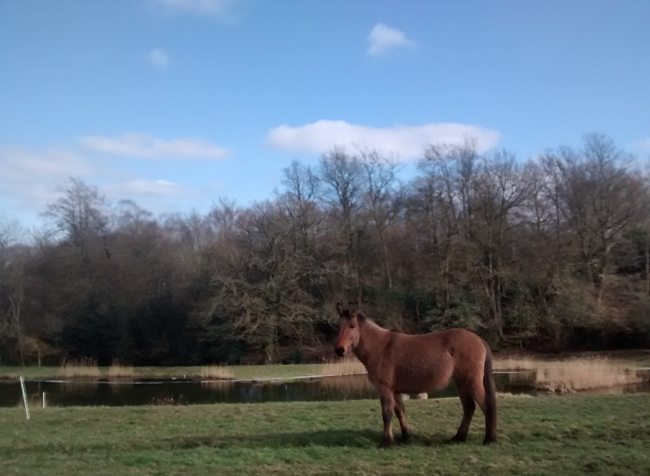 Yesterday morning I stopped by on my way to work and, before giving them their hay, I went into the field and walked up to Marty to say hi. Not only did he remain calm and allow me to do this, but once I was standing next to him he closed his eyes and very, very gently placed his cheek against mine. It was adorable and I felt hugely optimistic about catching him later.

I returned five hours later, and he wasn’t interested. He wasn’t putting a lot of effort into getting away, though; it felt more like he was just going through the motions to see if he could get rid of me, and once I’d blocked him a few times he stood still and let me approach. He waited until I was putting the halter on and then spun away and bolted, and I was incredibly disappointed.

I eventually caught him with the help of Ben and Iris, who helped me herd him into a corner and then blocked his exit. I took him into the arena, did some basic circle work (a thing I’ve noticed is that, when he and I have had a little bit of a set to, once I’ve got him he is AMAZING to work. I just have to pick up the leadrope and think left or right or backwards or forwards and he just does it), and then did what I was supposed to have done at the end of yesterday’s session: taking the halter on and off five times. He wasn’t relaxed about it, but he didn’t run away at any point and we moved him and the horses into their new field at the end of it.

I pinched Ben’s camera, then forgot to take it with me on our walk. But hey, that’s what phones are for. 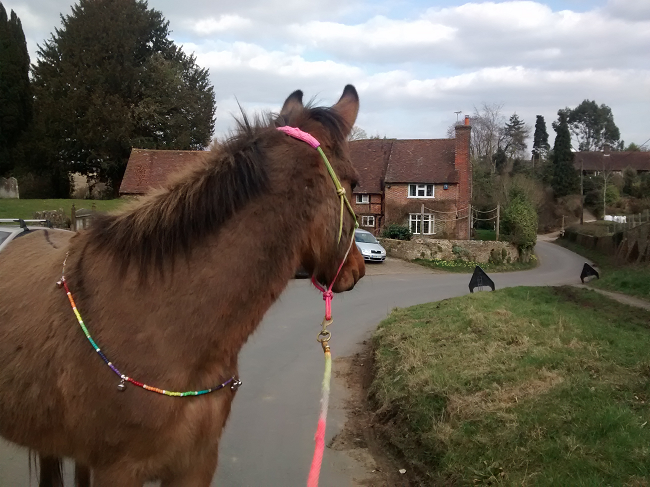 Today when I arrived, he wouldn’t even talk to me as I walked across the field. When I returned with the halter, he moved away before I reached the fence. They are in a small, fenced off paddock at the moment because of all the grass, so when it became clear that he wasn’t going to play, I just moved the fence to let the horses graze in a corner and blocked him from joining them.

I was able to approach him then, so I stroked his face and neck before turning my back on him and walking away. He followed me, stopping when I did, which was interesting as I’d thought he might try and rush past me to get to the horses. I kept my back on him for a few minutes, then turned and gave him a fuss.

At one point he moved away and decided that he would just graze over here, so I smacked the ground hard with my rope. If looks could kill! He was standing broadside to me, and he turned to stare at me with his ears out like aeroplane wings and held that position for a full minute or more. He was definitely thinking hard. He didn’t try to graze again – I’d reminded him that we were actually working – and I was able to approach him.

After that I spent a long time just stroking him. First with my hand along his crest, then reaching under his neck to stroke the other side. Then I rubbed his nearside shoulder with the hand containing his halter. When he was oki with this, I rubbed his crest with my right hand and used my halter hand to rub the other side of his neck. He tensed up the higher my hand went, so I waited until he’d relaxed and then withdrew and gave him some thinking space. The next step was to do the same thing again, except this time I moved my left hand high enough so that I could take hold of the halter in my right hand. He tensed at this and I felt his weight shift up and slightly away from me, but he didn’t actually go anywhere; once I realised that he’d decided to stay, I withdrew again. After that I was finally able to halter him. 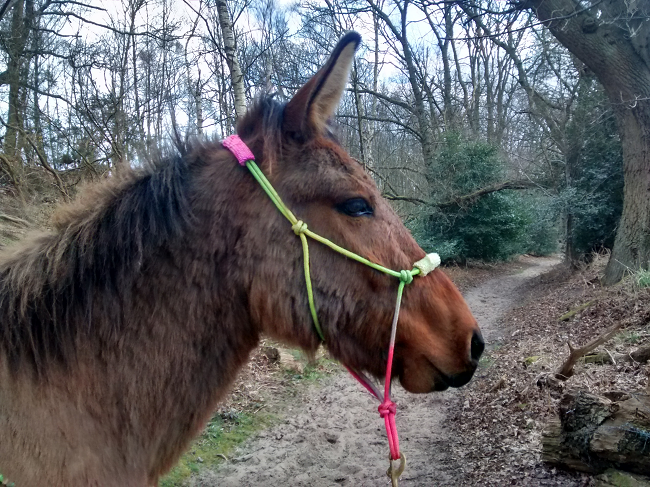 “Are you done? Hello? What’s happening?” 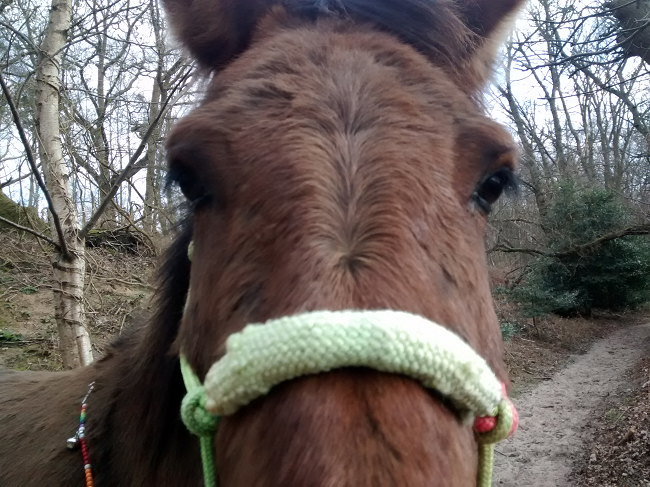 I ended up taking him for a nice 45 minute stroll around the common and back. During the fortnight that I was able to catch him, I admit to pussyfooting around for fear of doing something that might turn him uncatchable again; knowing about his anxiety in regards to leaving the property, I only took him out a handful of times and only for short distances. But as none of that had worked, I decided he could bloody well come out for a walk with me because I like going for walks and he’ll just have to deal with it.

He was actually really good; very forward going but well-behaved, interested and alert. We followed some new trails and met some new hazards. As it turns out, Marty is more concerned by the sign warning of roadworks than he is by the workman bobbing up and down in a massive hole surrounded by fluorescent green barriers (and when I say concerned, I mean he stopped and looked at it for a moment). We also encountered a different type of speed bump, bright red with painted white chevrons, but Marty was paying so little attention that he tripped over them … so they were a non-issue, too. The very dark, newly surfaced section of road didn’t register either, and when we had to walk under branches so low that even I had to bend double, he followed me without hesitation.

While waiting to cross the road, a man in a sports car pulled up to tell me how hairy my mule was and ask whether he was going to get a hair-cut. So that was kind of strange. Later I met a lady who called Marty a sweetie-pie and a teddybear, and we much preferred that kind of comment. 🙂 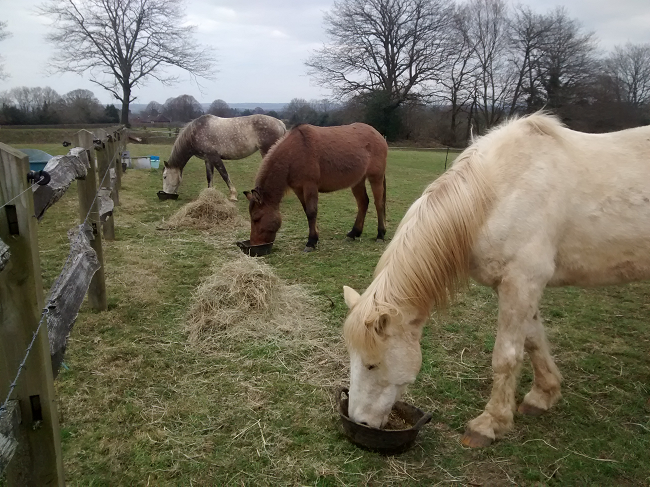 Once back in his field he still wasn’t interested in hanging out with me, and although I kind of miss my pocket mule who used to follow me around and pester me for scratchies, I’m content to accept that we are at least taking a step in the right direction. Again.