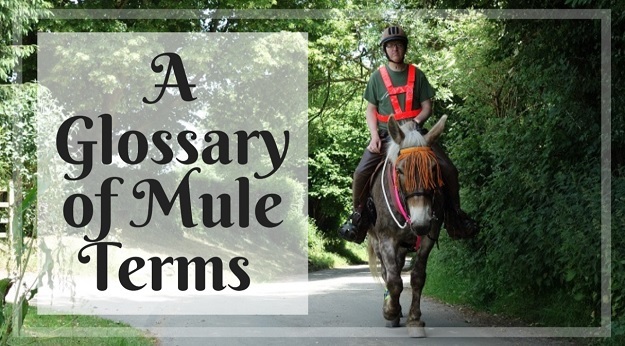 I thought I would put together a small list containing some of the words you might come across when exploring the mule world. I will add to this glossary over time.

Bell mare
A female horse (occasionally a mule or donkey) wearing a bell and serving as leader of a pack string. Mules are very fond of mares and you can pretty much turn them loose to graze anywhere so long as their favourite horse is kept confined – they won’t stray far! Darwin said, “The madrina is a most important personage: she is an old steady mare, with a little bell round her neck, and wherever she goes, the mules, like good children, follow her”.

Breeching
A strap that sits around the hind quarters of the mule and helps to stabilise the saddle – essential when packing, and recommended for riding as most mules tend to be wedge-shaped with little to no whither. Some riders will use a crupper instead. Honestly, I’ve no idea what the correct spelling is, but generally people will know what you mean! I always called it breeching when I worked with heavy horses, but I’ve adopted the term britching since moving on to mules.

Cacolet
Two seats mounted from a pack saddle on either side of the mule and used to carry injured soldiers. I believe this term also covers the version of field transport that has horizontal ‘beds’ instead of seats, but am not sure for certain.

Cotton mule
A smaller, lighter type of mule often used for ploughing light soil (larger than a mining mule, smaller than a sugar mule). A now obsolete term as, these days, most people refer to their mule’s type according to the mother’s breed (i.e. a Comtois mule, a Thoroughbred mule).

Draft mule
A mule out of a draught horse mare. This term was part of the old categories of mules (cotton mules, sugar mules, etc.) but remains in use today.

Hinny
The hybrid offspring of a donkey mother and a horse father – the opposite way round to a mule.

Jackass Mail Service, The
This mail service preceded the Pony Express in the USA by eight years. It covered 900 miles in carriages pulled by mules and had just one major supply station. Using mules as messengers was nothing new; the Assyrians were the first civilisation to use mules to carry state communications in a relay system across the empire, over 2000 years ago.

John
A male mule. Also sometimes referred to as a horse mule.

Mining mule
These mules were generally pony-sized and used for working underground, although the name was also sometimes applied to the larger mules who worked on the surface. They are the smallest of the old categories of mules, the next size up being the cotton mule. A now obsolete term.

Molly
A female mule. Also sometimes referred to as a mare mule.

Mule bars
Bars of a Western saddle that have been specifically designed to accommodate the straight back of a mule.

Muleskinner
Not as horrendous as it sounds! A muleskinner is a professional mule handler. It’s a popular term in the US and I’ve heard that “skinner” is slang for someone who can outsmart or “skin” a mule, but I’ve also read that it’s origins lie with foul-mouthed mule-men. As The Natural Superiority of Mules puts it, “the packers and teamsters were so proficient with their swearing that they could peel the hide off a mule with their profanity”.

Muleteer
A professional mule handler. This term derives from the Middle French word for mule driver, and is widely used in Europe.

Mule train
A long line of mules, either pulling a load or carrying pack.

String
A collective term for the mules in your pack team.

Sugar Mule
Larger than a cotton mule and smaller than a draft mule, these animals were solidly built and got their names due to being suitable for working on the sugar plantations. A now obsolete term.

Chunkering
To chunker is to canter long and low, bowling along with legs moving faster than the animal is travelling, nose in the air and ears back against the neck. It is something I also refer to as “running like an angry fat man”, and is a gait that Marty used to employ a lot back when he was a more frustrated, grumpy, misunderstood young mule. These days he’s only mildly frustrated, grumpy and misunderstood, and so chunkering is now a rare pastime. I have yet to see Xato attempt it.

Chuckle / huckle
This is the noise my mules make when they whicker to me, usually at feeding time. It’s more prevalent in Marty but Xato has recently adjusted his vocabulary to accommodate it as well. It sounds a lot like that hiccuping, chuckling noise that an alarmed zebra makes, only a slightly softer version.

Neighbray
This is not my word; I first came across it on the now sadly defunct Three Muleteers blog, which was the original UK mule blog and much better than this one. It is the word that best describes the sound a mule makes. All mules have their own individual voice, but it is usually half-way between a bray and a neigh (or, if you’re Xato, it sounds like a camp ghost).