Last weekend Ben, myself and our friend Debbie made a day-trip down to the New Forest to meet Sarah Weston and her mule, Henrietta. You may remember Henrietta as the first to be featured on Mule Tales! 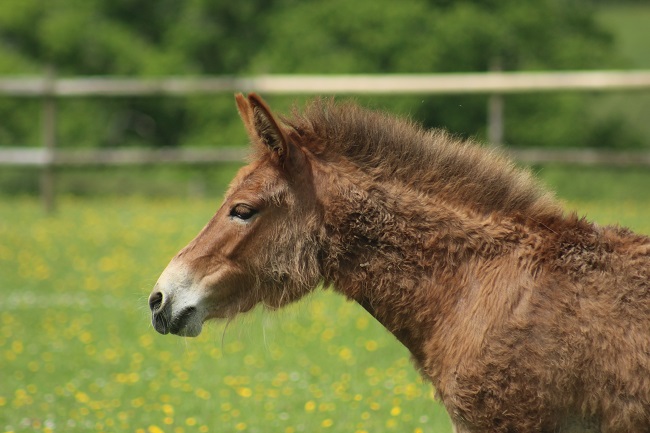 I love the New Forest, so I’ll take any excuse to dust off my camera and go visit. It was an added bonus to meet Sarah in person for the first time. I very much enjoy chatting with her online and, in one of those “it’s a small world” things, I actually work with a horse she started and have often thought what a lovely handle the mare has on her (I’m talking about the horse here, not Sarah. Although I’m sure Sarah is nice and responsive to lead, too). 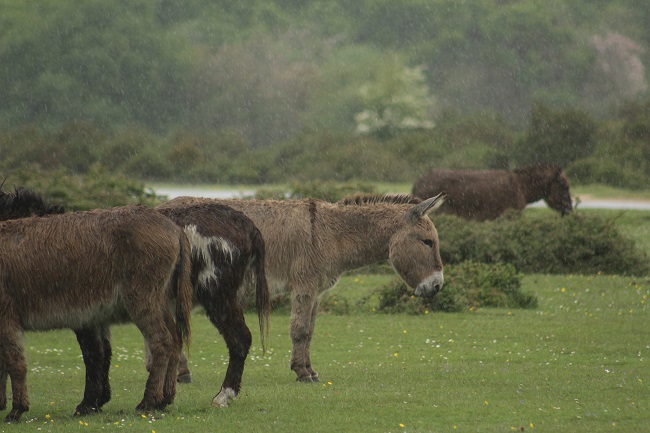 Some of the semi-feral donkeys out on the Forest. 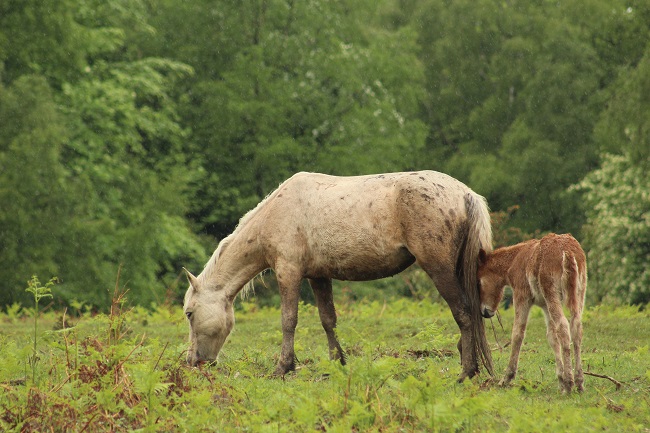 This foal had the right idea when it came to sheltering from the rain.

Although the event was named with Henrietta as the star, Sarah had organised it to help Twizzle the pony with his concern about crowds. A lot of wonderful people turned up and he handled it magnificently, so I think it was a success! I was wondering what Marty would be like if a large group of people descended on his field; I think he’d actually quite like it, providing no men tried to touch him. Or look at him. Or talk to me. 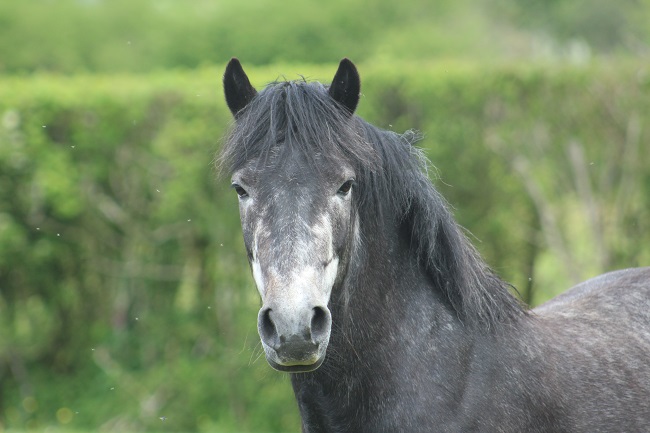 Henrietta was as gorgeous in real life as she is on the screen, even though she’d turned down Sarah’s offer of a groom that morning. I don’t think I realised quite how diddy she is, though. I kind of wanted to cuddle her, but I knew she wouldn’t stand for that! I did get to give her forehead a nice rub, though, which was funny because it took me flipping ages to be able to do that with Marty. And he wasn’t born wild, regardless of what he might try and tell you.

Henrietta has a lot of talent. She can jump: 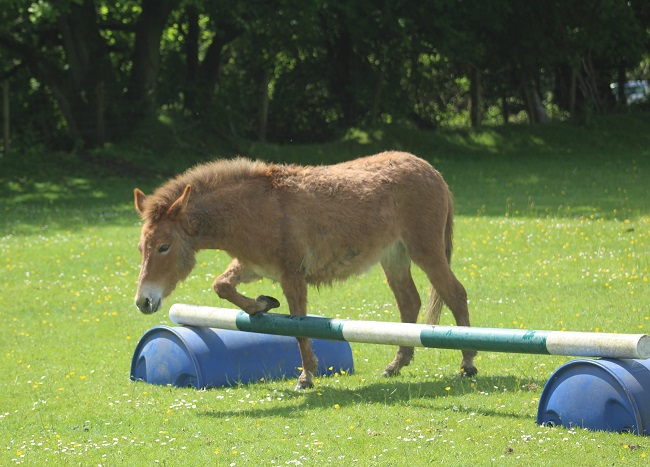 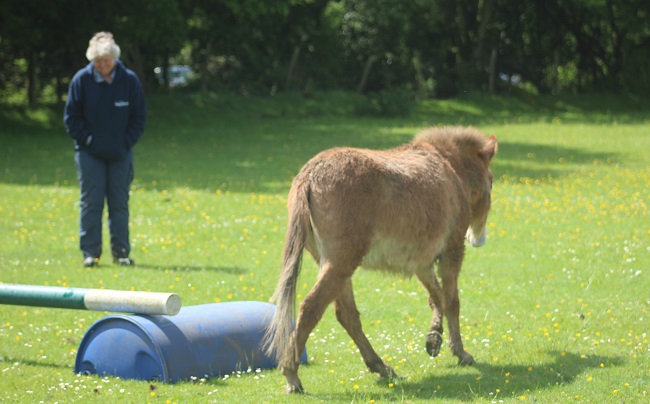 “How about we just walk around it? Doesn’t that make more sense?” 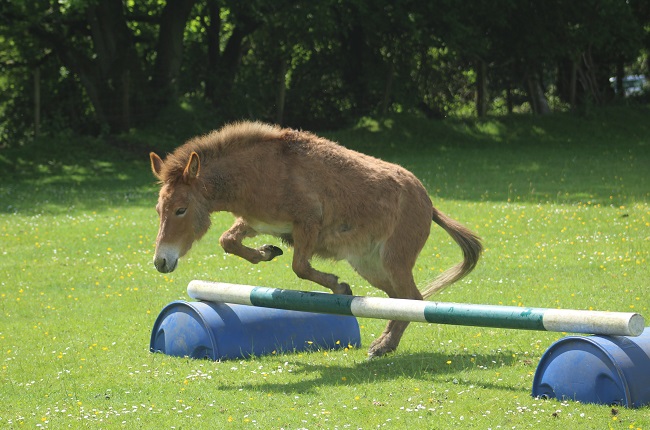 “Well, if there’s a ginger biscuit on the other side…” 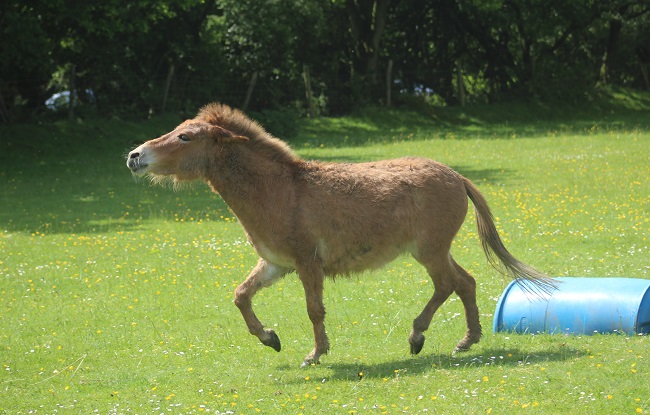 Now that’s a mule expression I recognise! As Sarah said, the ears back are for aerodynamics… 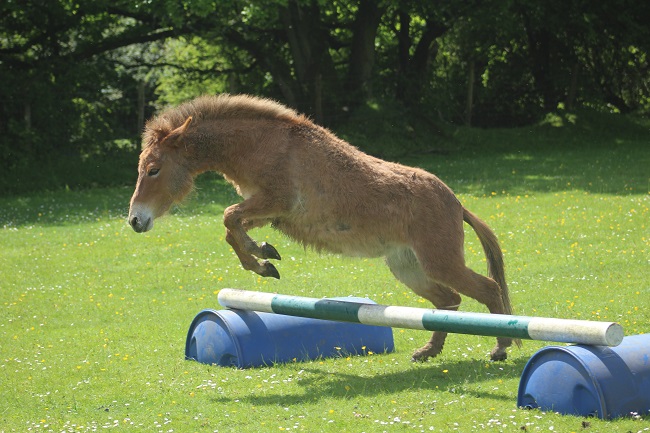 And a nice jump to end on.

She can stand on the bridge: 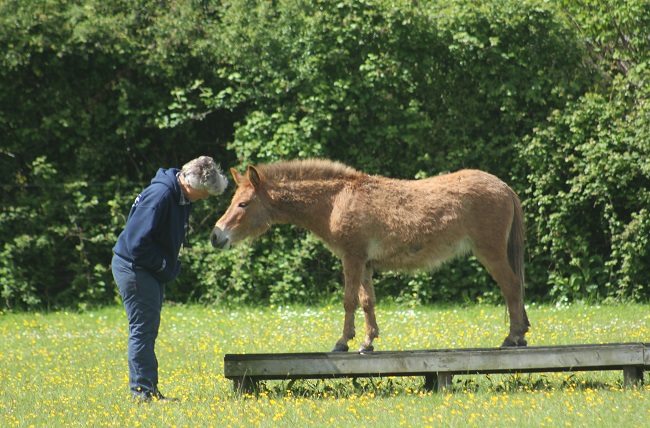 Even when it’s not strictly her turn…

And she can load herself into the trailer: 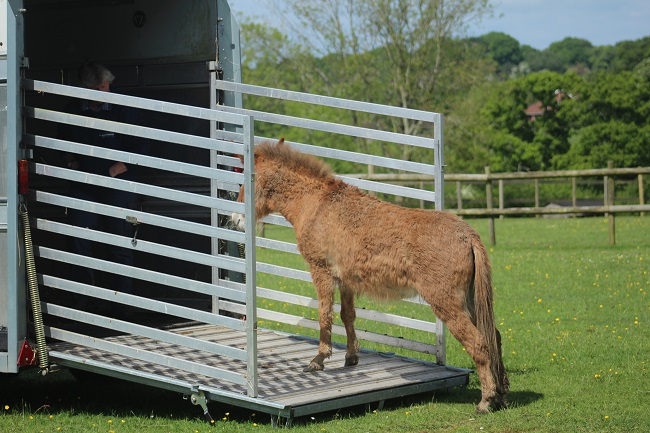 An interesting difference I noticed between them was that Henrietta was much quicker to take flight than Marty is, but she also came down a lot quicker. She had a very pragmatic attitude, and seemed a lot more confident in herself and her decisions than Marty. Marty likes to give it a lot of bravado, but deep down he’s not very sure of himself at all. 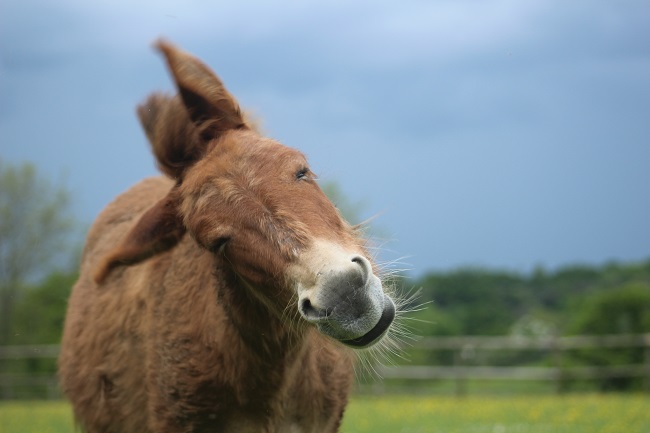 We worked on that later, as Sarah gave us a parting gift… 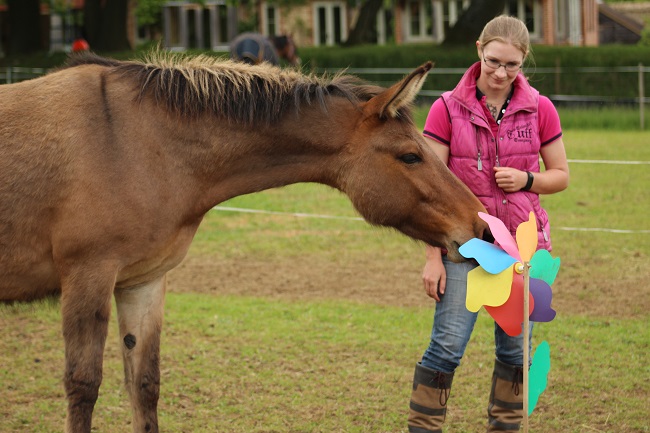 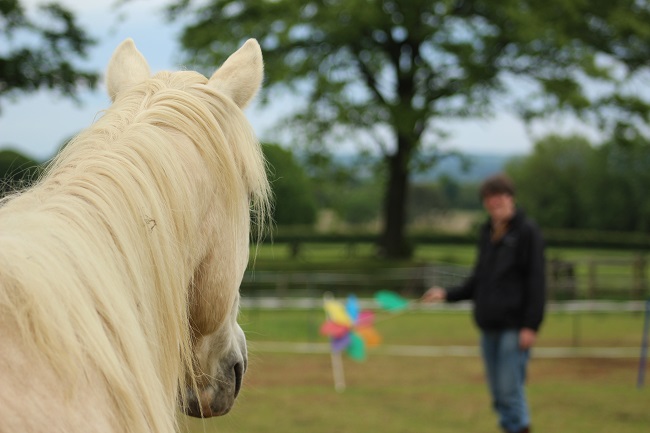 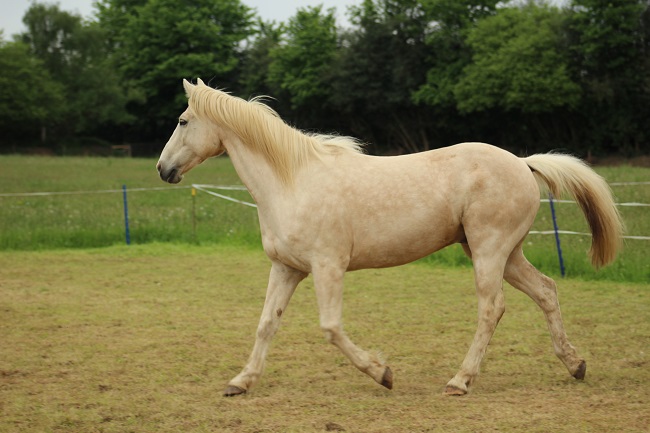 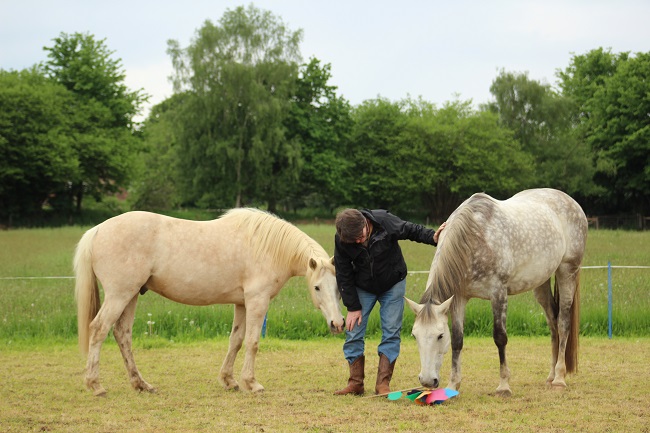 Iris was politely interested, and thought that maybe we wanted her to eat it; being a good mare, she did her best to oblige. Her reaction was the most interesting of all as she has so much anxiety about things that happen Out There – a distant horse on the horizon, a dog being walked two fields over – but a spooky object up close caused no concern at all. If I’d planted it in the field beyond ours I bet it would have been a different story! 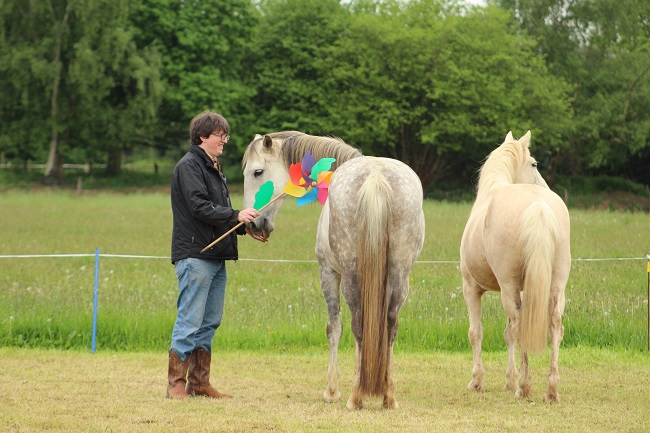 She was also happy for Ben to run it over her back.

Marty was brilliant. I love seeing the cogs in his brain work when he encounters a new thing; he doesn’t waste time in running away, or spooking, he just stands and stares with his whole being. Ears, eyes and nostrils will bring in the data he needs. Then, if it seems safe, he will go a little closer. I was actually able to get him to walk right up to the windmill by going and ‘fetching’ him, and letting him walk up behind me. He touched it a few times, showing a lot of interest, then had to retreat when the wind caught it and it began to spin. However, his retreat was a considered one, as he just stared at the windmill for a moment or two before taking himself off and walking back in a big circle so that he could observe it from another angle before approaching again. 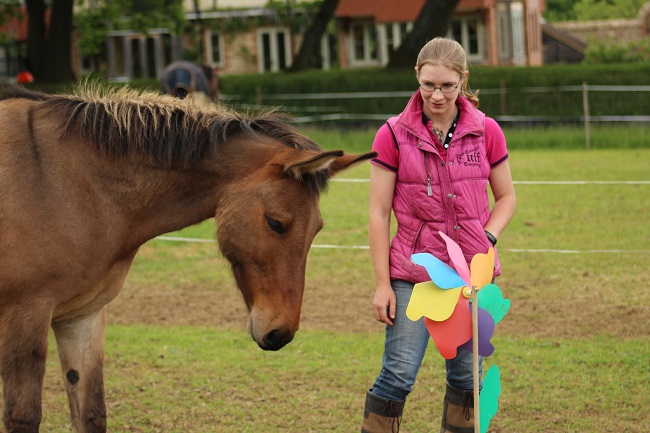 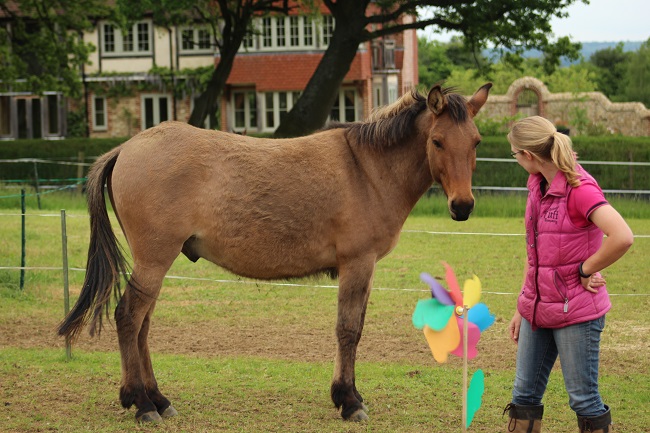 “I’m going to stand over here and think about it for a bit.” 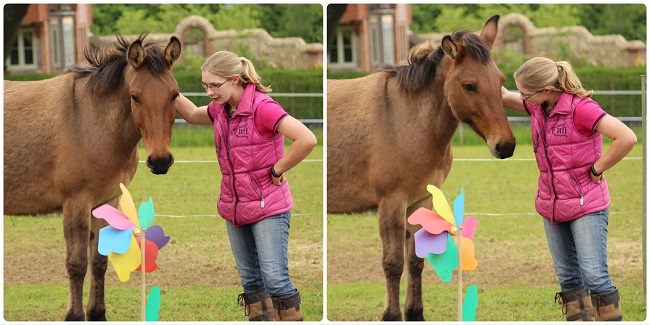 It was an altogether wonderful way to spend a day!