Marty was very funny yesterday, and reminded me of why I find him so fascinating to be around.

He’s been very easy to catch lately, although not as relaxed as I’d like him to be. He keeps trying to put me on his right side and this morning actually walked away from me, so to combat his automatic head-up, rigid-neck stance, I did some work on asking him to lower his head by putting my hand on his poll and he got the idea really quickly.

Anyway, yesterday I popped the halter on no problem but then realised I didn’t have any treats in my pocket – I did, however, have a bag of apples that I’d brought down with me. I didn’t have a knife so I offered it to him whole. At first he was reluctant to take it, even though he’s had apple (and liked it) before; then he took a bite, and I held on so that he would just pull a chunk off rather than take the whole thing and risk choking. This was the wrong thing to do apparently because as soon as he felt the resistance he shot backwards, frantically chewed up the bit of apple he’d taken with him, and then refused to even look at me when I tried to offer him the rest. I persisted for several minutes but he was having none of it, so I shrugged, gave the rest to Cash, and led Marty up to the yard for a groom.

He didn’t even want it if I offered it to him in a bowl. 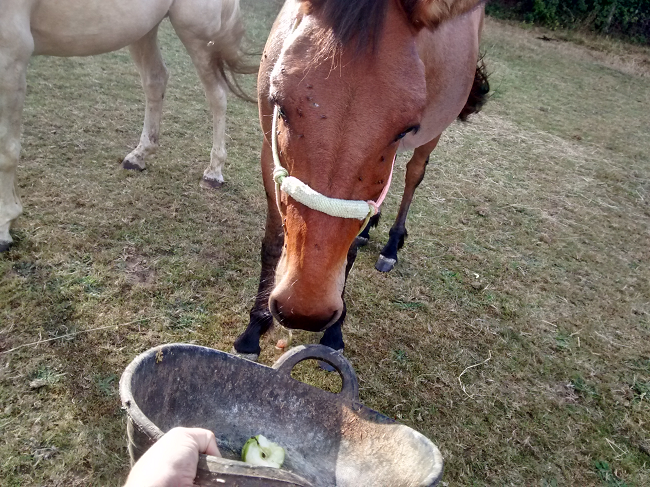 He’d seemed cheerful in the field, even with the apple incident, but was quite grumpy coming in and even more grumpy while being groomed. He even tail-whipped me in the face a couple of times. There didn’t appear to be any sensitivity or a particular thing that was causing his aggravation, so I took him round to the arena and just did some easy work on leading and asking him to move out on a circle. Perhaps he was just having a bad day, I thought.

He was absolutely perfect, although I was still getting an unhappy vibe from him, and so after a couple of movements I asked him to come into the centre and gave him a break and some scratchies. It was as I was doing this that I suddenly remembered I hadn’t given him any scratchies for being caught, which is something I’ve taken to doing whenever he has his halter on. Could this be the reason for his angst? Turns out: yes! He reacted to the scratchies like they were the best thing that had ever happened to him and visibly perked up for the rest of the session. It’s amazing how they remember these things and feel unjustly treated when you forget them. 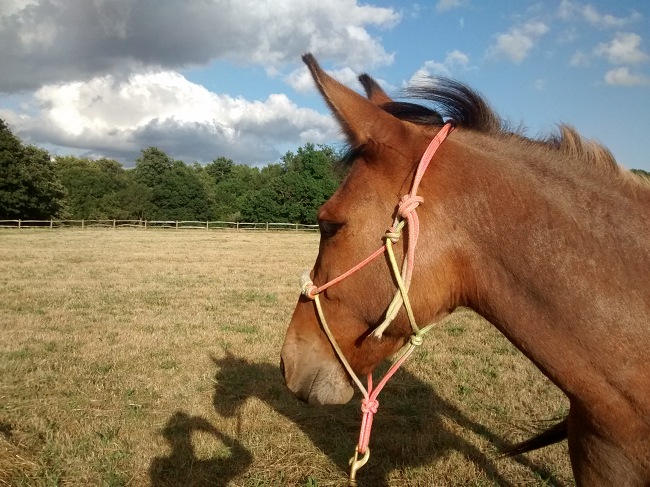 I’d brought the apples down to the stables because they’d been knocking around my kitchen for a while and needed eating up, so after working the mule I put one each in the boys’ feeds (Iris is away this week with Ben) as a special treat and took the dinner bowls down to them. The presence of an apple in his dinner didn’t appear to bother Marty until he’d eaten every bit apart from the stuff that was under the (untouched) apple, and then he started pawing while hovering his muzzle over the bowl. I removed the apple, placed it on the ground beside him, and sat back down.

He then moved to hover his muzzle over the apple, pawing several times with one leg, then the other, rhythmically alternating between them. Once or twice he even wobbled his lips over the apple as though he was about to take a bite, but decided he was unable to and resumed pawing. I watched him for a while to see if he would be able to eat the apple, which he obviously wanted to do. I’ve seen this behaviour from him before – he did it the first time I gave him hay in a net, and again when I started putting his beloved brix in a munch net for prolonged eating. The nets had the same thing in common with my attempt to hand feed him the apple – resistance when he tries to take a bite. With the other two, he stood and pawed for a long time until he eventually worked up the courage to eat. 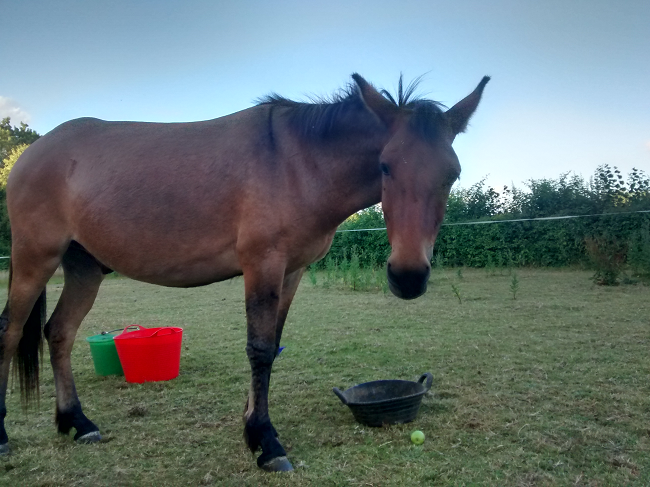 Eventually, unable to bear it any longer, I got up again and offered him the apple. He sniffed it several times then took hold, and this time I let him have the whole thing. He rolled it round in his mouth – I could see him carefully using his tongue to position it! – then got it between his front teeth and bit. One half dropped with a thud into his dinner bowl, and he regarded it with wide-eyed horror for a moment before quickly eating what he had and walking away. He refused to eat the rest of the apple so Cash got that one, too.

All in all, it was a fairly troubling day to be Marty and a pretty good day to be Cash.

I’m not sure what he was watching for, here; guarding against another potential apple invasion? 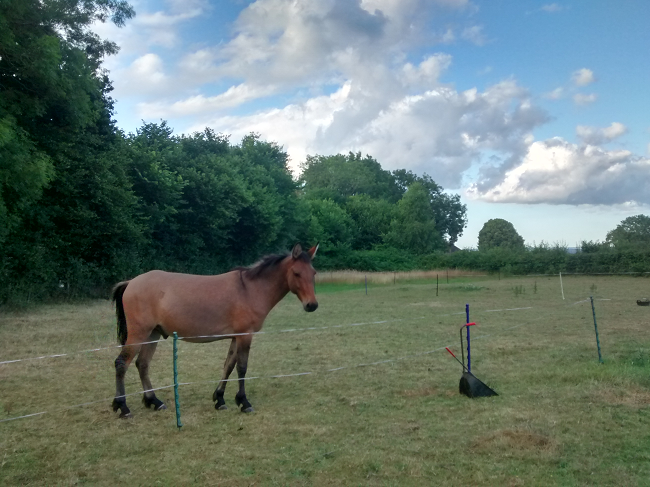