Halloween is over and done with for another year, but I thought I’d take a moment to talk about a small selection of paranormal mule curiosities. For further reading, I would point you towards my Top 5 Spooky Mule Tales or 4 Mules Mentioned in Mythology (the mule of Palden Lhamo, with its saddle made out of human flesh and the arrow-wound-turned-eye on its rump, is a little bit creepy).

Originally, Adrammelech – not to be confused with his consort/companion Anammelech – is an Ancient Semitic god about whom very little is known. He is mentioned briefly in the Old Testament where it says the “Sepharvites” (denizens of the twin cities Sippar Yahrurum and Sippar Amnanum near Babylon) would sacrifice their children to him and Anammelech. Pretty unpleasant.

However, we’re interested in his much more recent representation in Paradise Lost and, later, Dictionnaire Infernal. Here he is a demon: a fallen angel, the chancellor of Hell, and – somewhat bizarrely – the supervisor of Satan’s wardrobe. More importantly, he is depicted with a mule’s head, a human torso, a peacock tail, and mule limbs.

Der Messias, a poem influenced by Paradise Lost, describes Adrammelech as “a spirit in guile and malice exceeding Satan … The actions he performed were not to advance Satan’s kingdom, but his own.”

Unfortunately, it’s a little hard to be afraid of Adrammelech the demon when you see him in this Dictionnaire Infernal illustration. 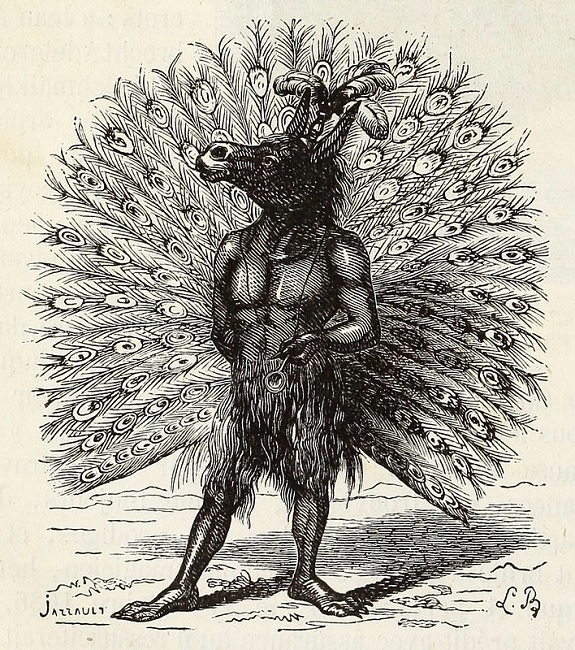 The motif of a diabolical black dog is a common element of folklore in Britain, and the Black Shuck is a version exclusively found in East Anglia – where I’m from. It is usually seen as an omen of death, but occasionally plays the role of harmless trickster.

County Folklore: Suffolk recounts a tale from the 19th century in which a Shuck is seen hanging from the toll-bar gates at Melton. Unlike most Shucks which took canine form, this creature had the head of a donkey. A group of people are roused at a nearby inn and go to capture it, but when the ringleader reaches for it the creature bites him – he “bore the mark of the Shock’s [sic] bite upon his thumb to his dying day” – and vanishes.

Another sighting in 1905 involves a Shuck which transforms from a dog into a donkey before vanishing a few moments later.

Further south, there’s a story from 1908 of a black dog in Bristol who climbed out of a ditch before turning into a donkey, rearing up, and running away.

As far as I can ascertain, the spelling of Shock rather than Shuck specifically refers to Old Shock – a variation of Black Shuck that can transform into either a donkey or a dog. Perhaps the one on the toll-gate got stuck halfway through transformation?

The Mule of Our Lady

In the 14th century, fishermen in the Cabo Espichel area of Portugal reported seeing a vision of the Virgin Mary, riding out of the sea on the back of a giant mule. The mule climbed the sheer cliff and vanished, leaving nothing but its footprints behind. The Nossa Senhora da Pedra Mua chapel was built on this spot and contains an image of Mary on her mule – you can see it here.

The ‘mule footprints’ going up the cliff are also still visible today as they are, in fact, the preserved footprints of a herd of sauropod dinosaurs.

On a somewhat unrelated tangent, there is also a rather fanciful story from the Ante-Nicene Fathers which tells how Mary heals a young man who’s been turned into a mule by placing the young Jesus upon the mule’s back.

Even more tangentially (sorry, I started Googling stories relating to Mary and mules) is this one which I will link to rather than attempt to retell. The basic premise is how a mule helped steer away Ignatius of Loyola – later to become the founder of the Jesuit order – from conflict and is an interesting commentary on the sagacity of mules.