Monday is my day off, and as I woke up this morning with only mild back pain, I decided that I was damn well going to go out for a walk with my mule. The weather was gorgeous, after all. He was perfect to catch and eager to go and explore – there was no planting at all when I asked him to leave the property and his fieldmates behind!

I decided to take him round the Punchbowl as his last few expeditions have been to the common, and I was sure that he’d appreciate some variety. The Punchbowl also happens to be our favourite place for walking in. He was amazing: alert, but calm and enthusiastic, and perfectly in tune with me. Just two mates out for a stroll. At one point we left the path to go and stand on a lookout point (he was mostly interested in the bench, however, and kept running his muzzle over the raised lettering on the seat back. I asked him if he was trying to read it and he gave me a withering look). To rejoin our path, I went through a dark tunnel in the gorse that required me to duck to get through it; mulo followed without hesitation, stepping lightly out into the brilliant sunshine on the other side, and it was one of those moments where my heart just sung for pride in him. 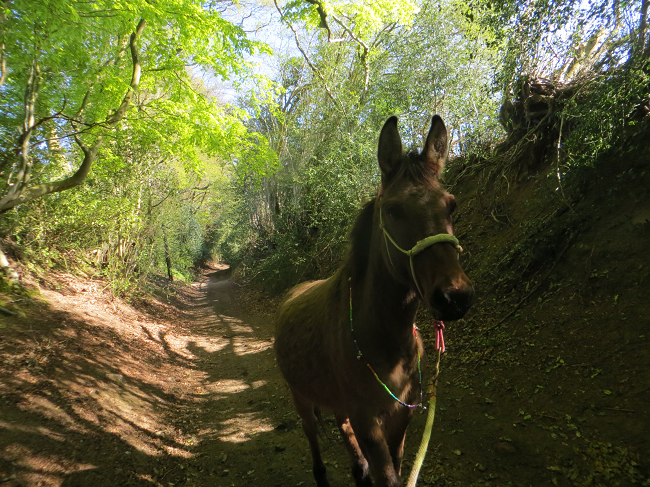 Marty never, ever passes up an opportunity to climb onto this little mound and pose, but today he had extra excuse because there were noisy little lambs playing in the valley below and he wanted to gaze at them awhile. 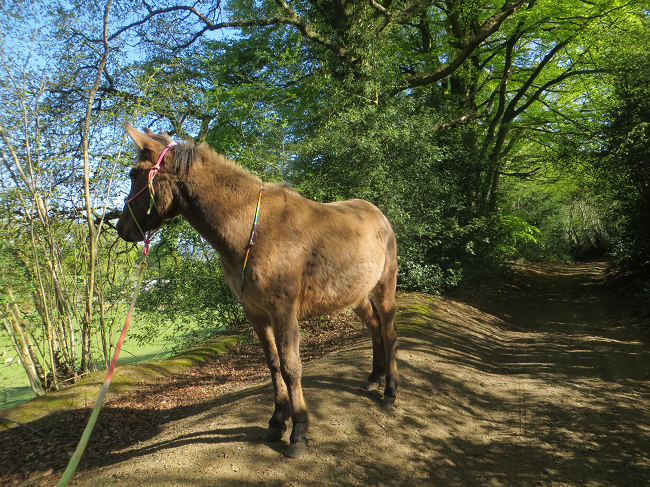 Smug mule is smug. “Why yes, I did just read the dedication on this bench. And then I constructed a two-hundred stanza poem on the passing of time and those left behind. But you wouldn’t understand it.” 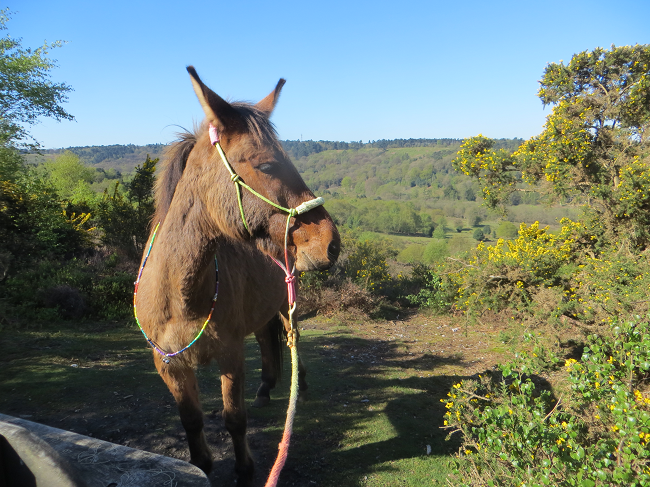 Although I’d had a route planned, when we saw an interesting pony-track winding its way along the valley side, we had to follow it. Obviously.

It brought us out on the top of a hill, and there we found the herd of Exmoor ponies – who were all very excited to see such a fine mule wearing his rainbow bling! You could almost see the little exclamation marks, bobbing above their heads. I allowed Marty to stand and look at them while I took the opportunity to snap some photos. One of the ponies got a bit too excited and started trotting around, but Marty was unconcerned, and after bidding the herd good day (“Hello, ponies! This is my lovely mule! Mule, these are ponies!”) we carried on along the ridge. We’d only gone a few steps when I heard the thunder of hooves and both mule and I stopped to see the Exmoors cantering up the slope behind us. Again, Marty was totally chilled about the whole thing; I stepped forward and used my energy to place a barrier between us and the herd, and then we ambled onwards. I wanted Marty to know that I was in charge of this situation and that the ponies would not come any closer. 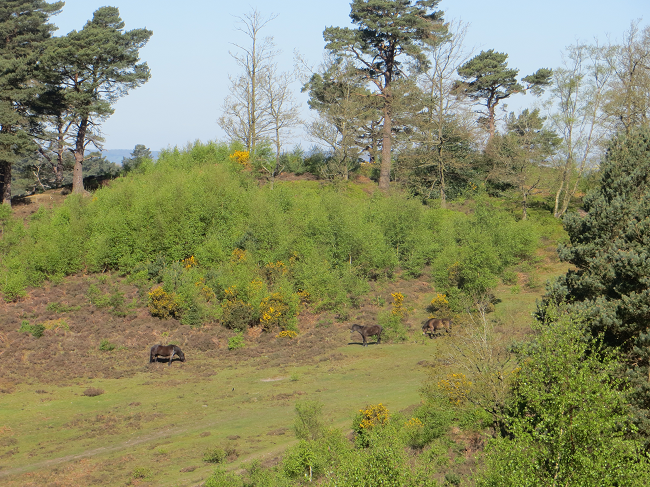 Marty looking at the rest of the herd, who were grazing further down the valley. 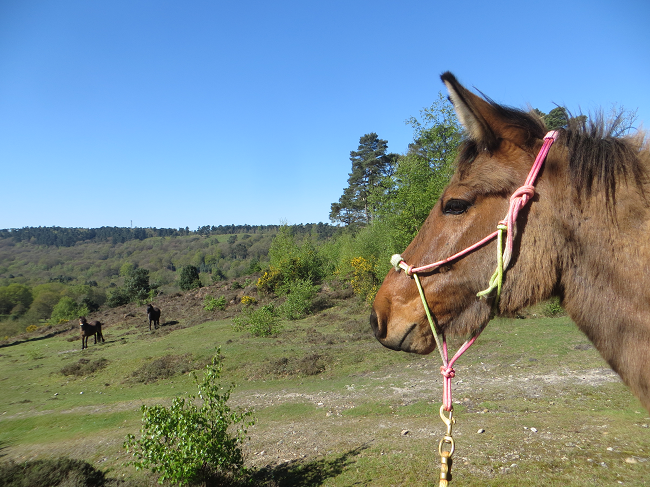 This was the little chunklet who started trotting around, and also the one who led the charge up the hill. I’ve never seen the Exmoors react to or follow horse riders before – I guess a mule who jingled was just too much for their curiosity. 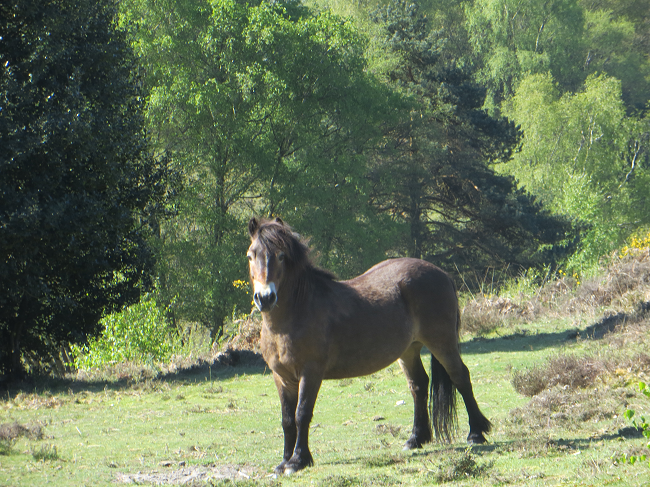 I’m pretty sure this guy is an Exmoor, just a very very dark one! 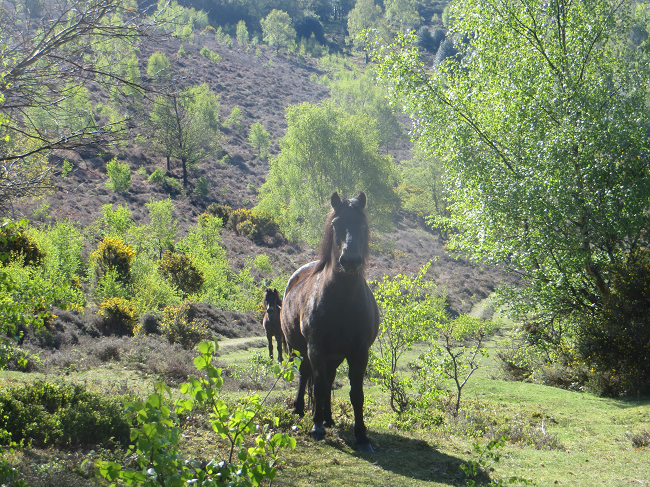 We wound our way through gorse taller than Marty, popping out onto a wider track – I think it’s a byway – that would lead us home. We were dawdling down here, playing on the steeps banks and weaving around the trees, because I was having such a lovely time that I didn’t want it to end. Marty seemed to be of the same opinion.

Someone appears to have swapped Marty’s Iberian heritage with a draught one. Also, he is getting very good at the “stand there and look pretty while I take a photo” command. 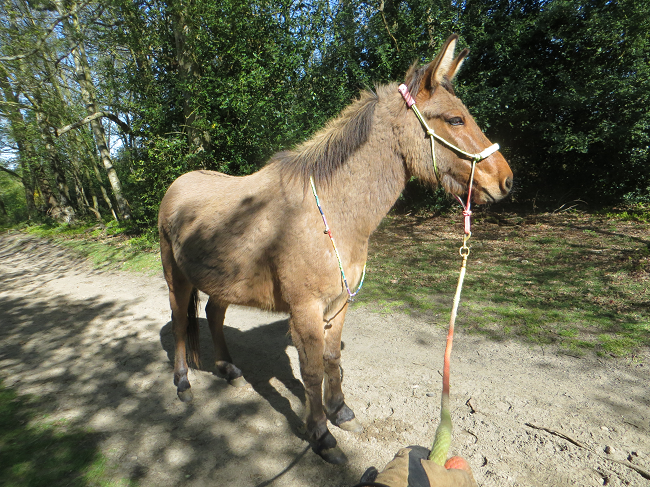 …Except for when he’d rather be eating. 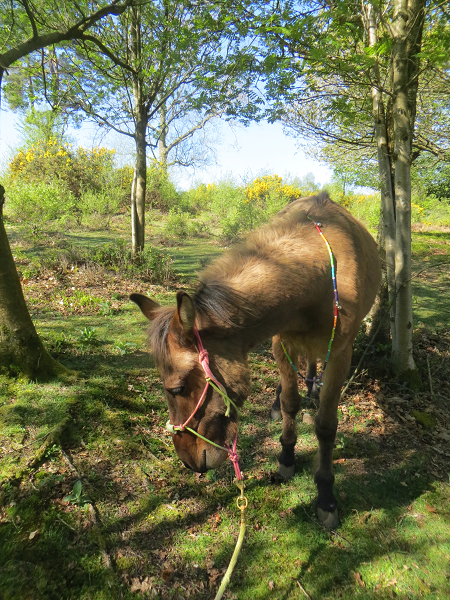 As we began our descent, Marty suddenly stopped and looked behind us. A pair of English Setter dogs had appeared; padding along, they were still some distance from us and didn’t show the slightest bit of interest in our existence. It looked like they were following a scent. I asked Marty to carry on but he was completely frozen in place, just staring at these dogs. Deciding that, if they were going to be a worry for him, I didn’t want them following behind us as we negotiated the slope, I turned Marty and tried to lead him towards them. There was a passing place between them and us and I figured I could do what I’d done with the ponies: set up a barrier, shoo them off, show Marty that we were the badasses, and then wait in the siding while the owner caught up and walked them past.

Marty froze up again, and when I picked up my energy to bring him forward, he responded by rushing backwards at speed. I tried to hold him and he reared, managing to spin and turn for home, and then he took off. I was forced to run with him at first, then tried to throw my weight back and use that as a last attempt to turn his nose and stop him; but instead he pulled me down, and dragged me for a few metres until I let go. He disappeared round the corner at the bottom of the hill and I was on my feet in an instant, shrieking “MartYYYYYY!” and sprinting after him.

Words can not describe my relief when I turned the corner and found him waiting, head high, snarping an alarm call. I dropped to a walk, said: “Hey, Marty. Hey, little mule”, and he ran to me. Actually ran to me, even though that brought him closer to the source of his fear. I was able to gently take hold of his leadrope and we stood, him shaking and snarping, as the dogs – now with their owner – came past and wisely took a different path. The guy must have thought we were nuts … and so, I imagine, did the jogger who I later realised was standing on higher ground, just staring at us. I’m sorry! I am competent! This has never happened before! Honest!

I briefly considered taking Marty back to the place he’d bolted and then descending the hill again, this time in an orderly fashion, but I was worried that if he took off again and I lost him – again – he might not wait for me this time. So we just carried on home.

He was powerwalking for the rest of the journey, but I was amazed at how quickly he came down; within a couple of minutes he was trying to grab a cheeky snack from the hedgerow. He didn’t put a foot wrong, and if he started getting ahead of me I asked him to stop and back up. Back at the yard I took him straight to the arena, meeting an enormous dog fox who had been sunning himself in the gateway. The fox jumped up and jogged away a few strides before turning to glare at us, but Marty was unperturbed. Why had the dogs been so scary, but the fox – and indeed, the ponies – been of so little concern?  His extreme reaction just seemed really bizarre to me.

I sent him out on a circle and walked and trotted him on either rein for a few minutes, and then practiced our halts. He did everything beautifully, responding to my body language as easily as anything. I let him hand graze for a while, then put him back in his field (the first thing he did was touch noses with Iris over the fence, which was interesting to me; seeking comfort, perhaps?). I took his halter off and then I guess all the adrenalin drained out of me, because I just wrapped my arms round his neck, buried my head in his mane, told him how much I loved him and how scared I’d been that he would get hurt, and hugged him. And he just stood there, for ages, with me clinging to him; he didn’t get grumpy and walk away, or pull a face, or ask for scratchies. He just let me hug him. I guess he was letting me know that it was alright.

Back in his field, munching grass. 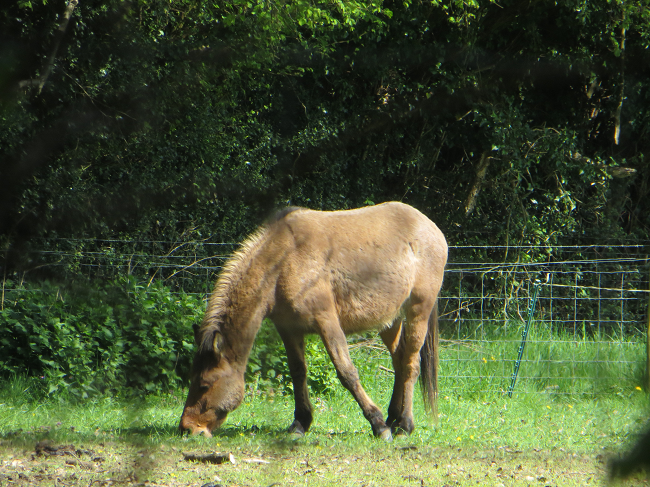 It was only when I got home that I realised I’d walked back through the village with blood and dirt all down my arm, dead leaves mangled into my hair, and mud plastered to the butt of my jeans and the sleeve of my hoodie. I even have mud down my back, underneath my top! My mule and I might not quite fit the aesthetic of a village that is primarily home to glossy, rosette winning, well bred competition horses; but we have skills. I bet no one else can do a spontaneous bobsleigh with their equine partner and manage to get mud on bits that didn’t even touch the ground.